Editor’s note: Around when we published the first part of our Bitch Planet Round Table back in March, Jennifer DeRoss reached out with a pitch for her own post on the satirical dystopian take on the women in prison genre. Since I knew that some of the round table posts to come addressed the same scene she suggested writing on, I suggested waiting and framing her own idea as a response to one or more of those posts, as to create an ongoing conversation.

In “Hard Time, Hard Women,” part three of The Middle Spaces round table on Kelly Sue DeConnick and Valentine De Landro’s comic book series Bitch Planet, Dr. Rebecca Wanzo contributed an excerpt from her book manuscript, The Content of Our Caricature: African American Citizenship and Graphic Storytelling with the organizing titular question, “What is the Liberatory Potential of Bitch Planet’s Exploitation Aesthetic?” In it, she describes the way in which the role of surveillance shapes how the women in the off-planet prison named the Auxiliary Compliance Outpost (aka Bitch Planet) understand themselves. She claims that the exploitation in the series is necessary to draw out the way that Bitch Planet resists the white male gaze and its overdetermination of black women through “flipping the script of normativity.” This is seen in what Wanzo describes as “gotcha” moments, where stereotypical scenes or events abruptly shift in an almost Miltonian way that reveals the error in that thought pattern. By Miltonian, I am referring to Stanley Fish’s reading of John Milton’s Paradise Lost (1667) as an epic telling of how humans came to be in their fallen state. This very state is demonstrated by Lucifer’s appeal in the text, while God’s actions appear dismaying. Although I agree with Wanzo’s assertions, I believe that Bitch Planet takes this a step further in its reader interaction. In answer to her question, I argue that the liberatory potential of the exploitation aesthetic in Bitch Planet lies in the way that it literally points out how exploitation works to the reader as well as a means of neutralizing the power in the gaze. 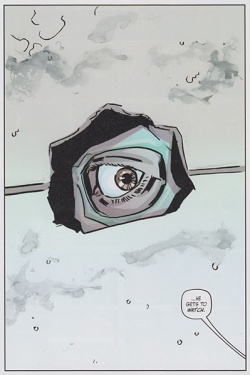 “Tommy Peepers” observing through a hole in the shower, while the women’s dialog comes from off panel.

“Those cherries fairly do enclose

Of orient pearl a double row,

Which when her lovely laughter shows,

This example shows him describing her lips and her teeth using the imagery of cherries and pearls as well as rose-buds and snow. He only looks at the parts of her face that he finds attractive, cutting them out and removing them from her face as a whole in an objectifying manner. This literal objectification reveals how she is not seen as a fully formed human being but as a collection of parts he enjoys instead. Her own thoughts and feelings are not represented in this passage as they are not important to him.  If we remove the “romantic” aspect of this form of writing, this is a classic example of the way that the male gaze is still being depicted in exploitative materials like pornography and women in prison movies. This cutting up is made tangible within the panels of Bitch Planet both in a benign way and in a way that demonstrates this kind of position-based gaze.

Before we are made aware of “Tommy Peepers,” we see the naked women from an unobjectified benign perspective. The women are cut up by the paneling but not in a manner that sexualizes them. In fact, we are pointedly told that Kogo was invited to join this shower time for reasons unrelated to her level of attractiveness. Most of the guards avoid the showers because it fogs their masks making the shower the one place where women can have open conversations. The exception is Peepers, who earns his name by peeping through a hole in the wall. Still, the women continue to achieve some secrecy through an “arrangement” where the girls’ conversations don’t get reported and neither does his peeping.  As this is being explained, we are given the implication that there are sexual things happening; however, this is not explicitly depicted as the reader’s position is not aligned with the male gaze. Instead, our attention is on what is being discussed by the women along with a visual of Peepers’ eye in a large panel surrounded by the panel-like shower grid. As his eye is the only piece of him that we can see, he is being cut up as well, but he remains in power because of his status as a guard and the fact that he is the one doing the gazing. This is highlighted in the statement that “…He gets to watch” which grammatically appears to give power to the women as speakers who determine what behavior he “gets” to observe; nevertheless, they cannot control the way that he sees them, nor the behavior that is occurring on the other side of the wall. In contrast, the position of control Peepers is in does allow him to determine the actions they are permitted to take. This negation is visually represented by the fact that the word balloon containing the “gets to watch” dialog emerges from off panel in the same panel where his peeping eye appears. This prevents these words from being attached to the speaker of them. While he is looking at the unobtainable women he desires, he neither takes in what is being said, nor who is saying it, thereby rendering their words meaningless. Furthermore, the fact that the women believe they are allowing this behavior does not change the inherent power difference enacted through his gaze. This difference is exemplified the second time we enter the shower through a male gaze-based positioning of the reader.

Kamau Kogo cut up by the comic panels emulating the male gaze’s dissection through a peephole.

Positioning the reader from the perspective of the male gaze enables them to see how Kogo makes use of the same methodology the women utilized earlier while also disrupting the pattern of gaze-based objectification. This sequence starts with Kogo leaving her team’s post-game celebration to have some alone time near the hole we know that Peepers makes use of. As she seemingly pleasures herself, we see her body cut into salacious individual square panels overlaying a larger image of her body. We see a pornographically angled image of her butt, her playing with her nipples, her biting her lip… We also see Peepers’ eye in a long panel of its own below. Like Campion’s sonnet, we have a wall (this time literally) and a series of images that fragment Kogo, denying her existence as a whole person. We even get three separate depictions of her lips from the perspective of the gaze. When she spots his eye, she responds with Wanzo’s “gotcha” and then we see her full body as she proceeds to smash the wall he is hiding behind and pull him out from behind it.

This is a powerful reversal of the pattern seen in the masturbation scene as each square tile that comes off the wall serves to free her powerful body from his limited view of her as made up of the individual pieces. Taking this even further, we see her wrestling Peepers to the ground, getting his name—Rick Weldon—from him, and then using the same kind of gaze against him for identification purposes. Arrows that come into the panel from the gutter point out each freckle that Kogo spots on Weldon’s now flaccid penis, thus cutting his body up based on perceived importance to the viewer just as he did hers and both of these acts carry power. This allows for an equalizing as they are now placed in the same revealed position. As such, they can now be “partners” in that they are both made vulnerable to prison policies. Once again, the word balloons provide evidence for this because the collapsed wall allows for each of them to not only have their whole bodies visible, but their word balloons are now appropriately attached as well. Her first act as a full individual in Peeper’s eyes is to demand that he stop peeping on the other women thereby preventing their further objectification and surveillance. She also makes use of her gaze-based leverage to insist that he join the Megaton team patrol in an attempt to further protect her fellow women in the prison who are being objectified for the sake of male pleasure in the context of sports.

One of the reasons that Bitch Planet is such an effective series is because it is so recognizable. People are living in an exploitative world every day as the male gaze determines the choices available to those subject to it. This a key tool of our current patriarchal system of oppression that keeps non-males in an objectified position, thereby denying them full participation within our society. The male gaze denies the agency of his far-removed object of desire because their wants and needs are framed as less important than the desire the male feels when looking at their individual parts. Unfortunately, the gaze is reinforced and implicitly encouraged by the media around us. This is explicitly explored in the way that Weldon was incapable of seeing the women as anything more than their individual parts when a hole in the wall was his only point of view. While still exploitative, Kogo’s reclaims her personhood and empowers herself to gaze back and identify the individual aspects of Weldon as well as gain his name. This equalizes the power dynamics of the gaze. The inclusion of the arrows pointing to each of Weldon’s penile freckles makes this moment similar to an instruction manual literally showing readers how to look at the man just the same as men are taught to look at women. (see also Rachel Marie-Crane Williams’s contribution to part two of the Bitch Planet Round Table), Thus, this sequence starting with a shower masturbation scene showcases the specific way that the exploitation aesthetic is a necessary facet of Bitch Planet’s liberatory potential.

Dr. Rebecca Wanzo rightly asserts that surveillance shapes the way the women on Bitch Planet understand themselves and points out how the porn aesthetics used in the series draw out the exploitation inherent in them. That said, if we take a broader Miltonian perspective we can see how this kind of surveillance is everywhere just as the male gaze is everywhere. By placing the reader in the position of the male gaze, DeConnick and De Landro draw out the way in which this positionality is wrongly normalized within our current patriarchal society. The male gaze empowers men and objectifies women as it reinforces the belief that a woman’s feelings and thoughts are not as important as the desire a man feels for the specific physical attributes the woman possesses. While this is used throughout the series in both sexual and athletic contexts, this issue places the reader within a specifically sexualized male gaze-based position to elucidate the power dynamics therein and then quickly shows how those oppressive practices can be undermined through a claiming of agency and selfhood. Patriarchal society has a long history of teaching men how to look at women exploitatively. This issue explicitly encourages women to smash that wall of separation and look back.

Jennifer DeRoss is an Instructional Specialist, mother of two boys, and all around geek. She graduated from the University of Oregon with a Master’s in English and a focus on Comic Studies. She has forthcoming pieces on Swamp Thing, Buffy the Vampire Slayer, Wonder Woman, and Orphan Black. She is currently working on a biography of Gardner Fox for Pulp Hero Press and writing reviews for Comic Crusaders. Follow her on Twitter at @JenniferDeRoss.

One thought on “Countering the Gaze: The Liberatory Potential of Bitch Planet’s Exploitation Aesthetic”