Editor’s Note: Today’s guest post, by Orion Martin, gives readers a look at the world of Chinese indie comics through the Special Comix series. I became acquainted with Orion’s work when his post “What If the X-Men Were Black?” was published at The Hooded Utilitarian, and then later featured on NPR Code-Switch. While this post diverges some from the usual fare on The Middle Spaces, I appreciate the exposure to international comics I might have never otherwise discovered. 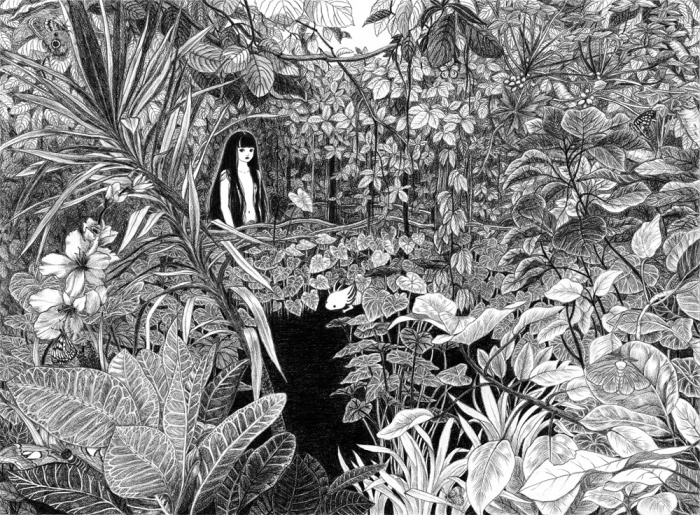 Walk into any bookstore in mainland China and you will find a range of manga-style comics about love, friendship, and feudal warlords. You won’t be able to find the weird, sexy, sometimes amateurish comics being self-published by independent Chinese cartoonists. For that, there is the self-published anthology, Special Comix.

Founded in the mid-2000s by cartoonist Tang Yan, Special Comix (sometimes shortened to SC) is an organization of cartoonists who collaborate on hulking, semi-annual anthologies. The self-published series, also titled Special Comix, features a wide range of cartoonists and (so far) increases in size with each new edition. At 409 pages and 42 contributors, SC4: Unexpected (2011), is a hefty tome, rivaled only by SC5: Silent (2012), which is somehow even larger. Along the way, the editors began incorporating artists from outside mainland China with contributions from Taiwan, Hong Kong, Japan, and Europe, though the majority of artists are based in Mainland China. Taken together, these anthologies form a kind of history of independent cartooning in China.

Chai He, An Education (from SC6: Transform).

Published in 2012, SC5: Silent is a testament to the diversity and energy of the Chinese comics community in the early 2010s. The book features 600 pages of short comics, essays and interviews in both Chinese and English. While the entire book is printed on distracting colored papers, and (as with any anthology of this size) there is a range of quality in the works, the enthusiasm of the participants shines through, notable in the simplified lines of Gan Mu’s contribution, for example.

Fast forward three years to 2015, and Special Comix released SC6: Transform. Unlike each previous edition of Special Comix, SC6 is not a bound book of comics. Instead, it is a box of 45 full-color posters. There is a striking range of work in the anthology, from Dick Ng’s pulp comics-inspired aliens to Jakub Jochym’s drawings of mutilated bodies in smudged ink. Many artists, including Yucco Yu, WangXX, Xiao Longhua, Xiang Yata, and Zuo Ma, return to the collection, but there are many new faces as well. Several of the contributors, including Jun Cen and Yayi, come from an illustration background, and their lush, immersive compositions seem well-suited to the poster format.

Readers coming to the collection expecting a book of comics will no doubt find the format frustrating. Tactilely, the anthology is difficult to interact with, requiring the reader to unfold each poster in order to view it properly. Due to the folding, the posters are visibly creased, even when taken out and hung.

Setting aside the question if a portfolio of posters can be considered comics, the move from bound book in 2012 to posters in 2015 reflects larger changes in the Chinese comics community. Many cartoonists in China see comics as only one aspect of their practice, which may include illustration, painting, clothing design, or all of the above. Yucco Yu and Tang Yan both run clothing/lifestyle brands, and Xiao Longhua and Yan Cong (who I profiled here) are working at the intersection of painting and comics.

Like other iterations of Special Comix, the artists are working in a range of qualities and directing their work towards diverse, sometimes mutually exclusive audiences. Some artists use the poster format to great effect, creating dense visual landscapes that challenge the reader to interpret them. Yayi’s intricately constructed illustration guides the viewer from one symbol-laden visual to another, refusing to settle into any obvious reading. Similarly, New York-based illustrators Lisk Feng and Jun Cen contribute surreal works that seem to a capture a single moment from a much longer tale. Lisk Feng’s work depicts a troop of Boy Scouts and the creatures that haunt them, while Jun Cen presents a naked woman who has just encountered a giant praying mantis encased in a Mignola-esque crystal prison. Though both these artists come from a background in illustration, they use the poster format to build the foundation for a narrative that could develop in multiple directions.

The decision to publish posters instead of a book allows the editors to bring in artists who may have seemed out of place in a collection of more traditional comics. These include not only illustrators but contemporary artists and painters such as Jochym, who is represented by Saatchi gallery. Lu Yang’s contribution is a poster for her multimedia project Uterus Man about an anime superhero who surfs through space on a tampon. 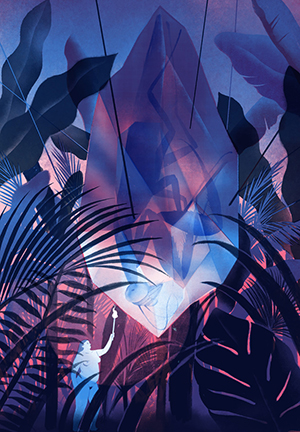 Though the English title of the anthology is “Transform,” the Chinese title, Biantai, could also be translated as pervert, and indeed, the collection features many explicit works that would make it impossible to distribute through any mainstream Mainland Chinese bookstore. Mengli Qi’s contribution is a photo of her series “Pussy Water,” a modern adaptation of the 1980s comic form lianhuanhua with explicitly sexual themes.

The variation among the works is something of an asset, for if the intended purpose is to hang the posters on the wall, any reader will presumably only have space to hang a few works. When I got my anthology in the mail, I hung two of the posters, one by Liu Huan and one by Chihoi.

It was Chihoi’s work that really won me over to the conceit of the collection. The Hong Kong illustrator depicts a lone figure in multiple positions throughout a single, perspective-warped landscape. I found myself reexamining the work time and again, discovering more details about the buildings and landmarks (many of which reference Hong Kong) and the story of the isolated man who wanders through the plazas. Like the best works in SC6, it is a complex concept compacted into a single pictorial space, which seems to me to settle any question of whether a comic anthology can be published as a collection of posters.

Chihoi, I’m waiting for you to come back (from SC6: Transform).

Orion Martin is a writer and Chinese translator based in Brooklyn, New York. He writes about comics, art, and the ways that new understandings of comics can make them more meaningful to our lives. His work has been featured on Hyperallergic, The Comics Journal, and The Hooded Utilitarian. You can find him at comics.rorionmartin.com.