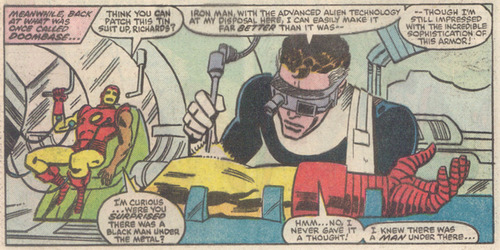 I went looking for this panel. I knew it was from Secret Wars, but I remembered it differently. Back in in 1984/85, when this 12-issue limit series was being published, it was only Marvel’s second major cross-over event (the first being the similarly themed 3-issue Contest of Champions). While Secret Wars II, would be Marvel’s first shot at the all-too-common practice of incorporating the universe-spanning theme to most if not all of their titles, Secret Wars actually handled it intelligently. All the events in this series happened between issues of the regular series of heroes included therein. So, for example, in Amazing Spider-man issue #251, Spidey is seen entering the strange construct that transported him (and all the other heroes) to what would become known as “Battleworld.” In issue #252, he returns and all the events of Secret Wars happened in-between. No need to purchase a bunch of filler tie-in issues only designed to prop up poorly selling titles to get the whole story.

Anyway, this panel is from Secret Wars #8. It stuck out in my mind because I remembered it as another superhero (in my mind Spider-man) acting surprised to see a black man in Iron Man’s armor—at the time Tony Stark was busy recovering from alcoholism, and James “Rhodey” Rhodes had taken over the mantle of Iron Man. This was before the days when Tony Stark had revealed his identity as Iron Man, so as far as anyone knew the same person was in the suit (though as we shall see in my next post, some folks had their suspicions). I remembered it as this uplifting and resistant moment—like “fuck yeah, there’s a black man in this armor. Your all-white club of adventurers can’t keep me out!”

But, as you can see, Rhodes asks Reed Richards of the Fantastic Four if he was surprised to see “a black man under the metal,” and we are supposed to be impressed with Reed’s color-blindness: “Hmm. . . No, I never gave it a thought! I knew there was a man under there. . .” But Reed Richards is supposed to be the smartest man on the planet. . . Is he not observant? It doesn’t take a genius to see the stark under-representation of African-Americans (and other people of color) in the Marvel Universe (especially among superheroes). He should be surprised. Rhodey’s blackness matters, both in the fictional world of Marvel Superheroes (where among the top flight heroes meant to take part in Secret Wars only three are black and none are Latino) and in the world of its readers, like 13-year old me, who were looking for characters to identify with, even if that identification ends up being a misprision, or to use a term from queer theory, a disindentification: “How those outside the racial and sexual mainstream negotiate majority culture, not by aligning themselves with or against exclusionary works but by transforming these works for their own cultural practice.” (Munoz, Disidentifications)

It is no wonder that in The Brief and Wondrous Life of Oscar Wao Junot Diaz writes, “You really want to know what being an X-Man feels like? Just be a smart bookish boy of color in a contemporary U.S. ghetto. Mamma mia! Like having bat wings or a pair of tentacle growing out of your chest.” The X-Men, as the bad-ass outcasts, were the closest thing we had to aspire to. Hell, there is even a scene in Secret Wars where Storm’s concerns are dismissed as “angry black woman talk” by Professor X who threatens to mind control her if she doesn’t unquestioningly obey his commands, despite her ostensibly being the leader of the X-Men at that time. 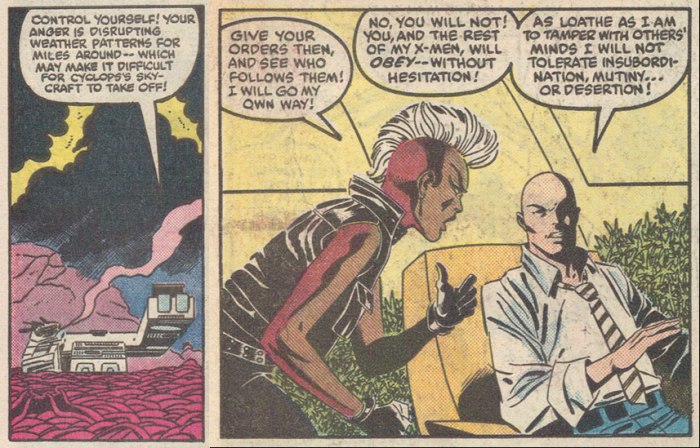 Color-blindness of the kind that Reed Richards asserts in this panel just reinforces a white supremacist status quo of which the mainstream comic world is among the most obvious example. To claim to not be surprised is to fail to acknowledge a reality that needs addressing. In my memory the scene addressed it through Rhodey’s defiance, which goes to show that regardless of how much a comics fan I was (or am) that defiance was part of how I interpreted a world that makes white supremacy manifest in four-colors.