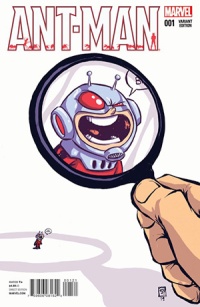 I liked this a lot. If for no other reason that they brought back Cassie Lang (I thought she was still dead) and maybe even de-aged her a little bit. Spencer is taking some liberties in emphasizing Scott Lang’s potential loser tendencies in order to build a tense sympathy and of course play it for humor, but it works. The choice of starting with a set-up one-shot was also a good one. I think after the success of Superior Foes, Spencer is warmed up and seems ready to deliver a more long-form masterpiece. Let’s see if it happens. Ramon Rosanas’s art is serviceable and aided by Jordan Boyd’s fine coloring job, but it could stand to be a bit more inventive and playful with the paneling and visual storytelling. Regardless, this gets a thumbs up and I look forward to more. 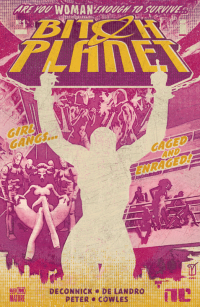 Bitch Planet is Kelly Sue DeConnick’s new book at Image, with art by Valentine De Landro. I missed this when it came out, but was happy to find a copy in the back issue bin. Normally, I might wait for this to come out in trade form, but figured I needed to get a few of the individual issues to help make sure it is around long enough to make it to be collected. This book takes an immediate and unapologetic feminist perspective and aims at breaking free of the shackles of patriarchy, by kicking ass and taking charge of the ole exploitative “women in prison” trope, but also kicking ass in an outer space setting. It features some interesting twists and great art. I highly recommend picking up a copy. Issue #2 will be out soon. 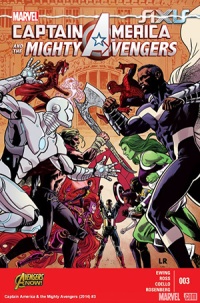 With this issue, the tone of this book swung wildly from the previous over-obvious turgidity. Suddenly, Ewing seems to be writing like Spenser did on Superior Foes of Spider-Man, or should I say the superior Superior Foes of Spider-Man, because it doesn’t work. I don’t know what the tone of Axis event was like, but I thought it was more subtle than the stupidity and aggression demonstrated by the good guys-gone-bad that face up against Monica Rambeau’s Mighty Avengers. Superior Iron Man was more interesting of an idea when I thought he was going to be written to emphasize the dark side of his personality, but here he is written more like one of his own cheesy rogue’s gallery, as unnoteworthy as that gallery is. Still, better in a more “fun” direction than in a dour and over-serious one. This could be the contemporary version of a Defenders book, kind of like the Gerber and later Kraft run that took a mix of iconic characters and “second tier” characters and developed weird and interesting plots. I wonder who would be best to write something like that now, because it isn’t Ewing. The art is mostly serviceable. There were two pencillers and I am not sure how they split the work, but some of the pages is clearly better than others. The first three pages are rubbish. 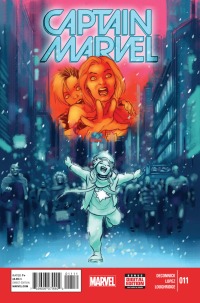 Another fun issue. DeConnick seems to be hitting her stride. However, the appearance by Santa Claus kind of threw me for a loop. I expected the story to end up being told from Kit’s point of view after his appearance. Is Santa Marvel Universe canon? The art is at its best so far this run. Lopez’s pencils look great with Loughridge’s inks. 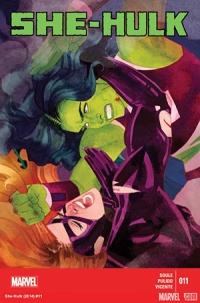 I’m gonna miss this book. It is going before its time and now we have to settle for a ham-handed quick conclusion to the slow-burn plot of the “blue file” and he mystery of Angie and Hei-Hei. I normally am not a huge fan of Soule’s writing, so I wonder how much this comic is benefiting from Pulido’s characteristic (Kirbyesque) style, but it works. One more issue to go. 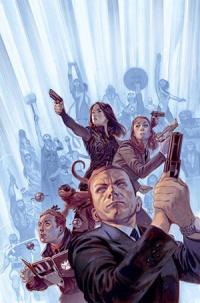 Meh. I got these because I was curious about backward adaptation, from television to comic book, rather than the other way around, which is most common these days. Also, Mark Waid is doing the writing, which should be a plus, but if these two issues are anything to go by, these series is a snoozer. Pacheco’s art in issue #1 is pretty good, but Humberto Ramos is not a favorite of mine at all (he penciled #2). In both cases, the fact that the characters from the Agents of SHIELD TV show are not drawn to look like their live-action counterparts is kind of jarring, but even more jarring is that the Marvel Universe of the TV show does not match up with the saturated superhero world of the comics. I guess they don’t have to, but the very little the barely tolerable SHIELD show has going for it is the sense of slow discovery of the superheroic and alien, that is completely gone here. It also doesn’t help that it is hard to think of SHIELD as good guys in the Marvel Universe, given its history, but clearly we are meant to think so. On the TV show the ambiguity works because the focus on a small group in the context of a corrupt organization infiltrated by HYDRA since its inception. Anyway, I do like the one-shot approach to the stories so far, and the appearance by Ms. Marvel in issue #2 was nice, but I think one more issue is all I will give this. 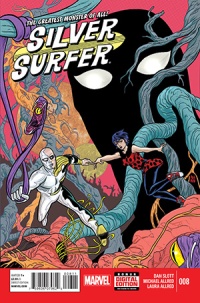 Dan Slott and Mike Allred (with Laura Allred’s alway-amazing colors) continue to fashion a fantastic book, an underrated book. If fair-to-middling Amazing Spider-Man is the cost of a great Silver Surfer title, then so be it. 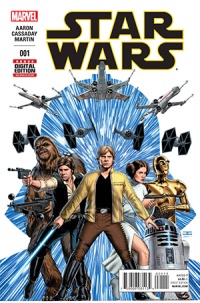 This series takes place just after Episode IV and before The Empire Strikes Back and it’s going to be good as long as Cassaday is doing the art. Aaron’s writing is good, too, but he shows a heavy hand in trying to catch the tone of the dialogue snap of the original two Star Wars films. That said, this comic is the most fun Star Wars related thing since Marvel’s last Star Wars series. Bring on the green bunny guy! 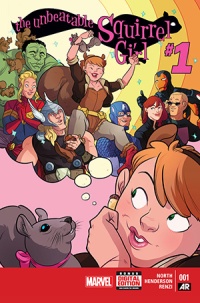 Cute. Has promise. I like the art style, and Kraven the Hunter makes a good foe for her. I’ll stick with it for now, and am glad Marvel is taking some chances on more fun and upbeat comics. 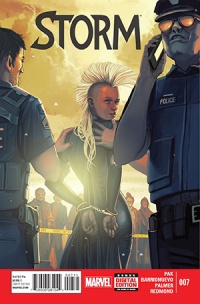 Great and timely cover, but the interior art continues to underwhelm. That said, there are some interesting things going on in this issue, Storm as a revolutionary, almost anarchist figure, the great number of people of color who start up a protest for her release. Heck, even the FBI agents and many of the police/guards are drawn to be black and brown. I am not sure what the latter means, if anything, yet, but I do like the idea of Storm being a political figure in black America (if not the entire African diaspora). It makes sense that she’d be more than a mutant leader, but a black leader. The evil CEO plot though strikes me as hackneyed (how many deliberately evil CEOs can one world have?), and the shift from passive (if temporary) acceptance of her arrest to violent escape seemed kind of sudden, yet this title gets to live on another month in my pull-list. 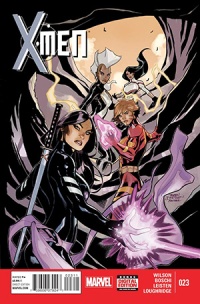 This is the first issue of the all-woman adjective-less X-book started by Brian Wood and Olivier Coipel (which I didn’t like and explained at length why that was) to be written by G. Willow Wilson (whose Ms. Marvel is my current favorite comic). Wilson benefits from not having the expectations of a “Marvel NOW” title to introduce, and while I am sure there are a lot of other folks who are as excited as I am about the possibilities of this series, I don’t think the hype has been as big as when Brian Wood was to start. The issue itself has an in media res feel to it, dropping the reader right into a disastrous climatological/geological event being witnessed by Gambit (of all people – I knew who he was because he calls everyone “mon ami,” but was depicted as a Burning Man scumbag, so perfectly, in other words), so there is no attempt to set up the status quo of the team or to introduce who is who (at this point there is a character I still cannot identify-turns out it was Monet, who was never named and I had never heard of), but I was willing to go on the ride because despite the use of Krotoa (which I also don’t understand aside from its appearance in Giant Size X-Men #1), the issue did not feel like it relied too deeply on convoluted continuity. While it was definitely connected to the continuity—Wolverine’s death is mentioned—the story does not require familiarity with details of continuity for its emotional resonance. It feels like an X-Men adventure, with the parallel events at the mansion and elsewhere, but I think all X-Men arcs need a bring-the-team-together-for-a-deep-breath-and-reestablish-the-relationships one-shot between them. An X-Men arc just isn’t an X-Men arc without some time in the Danger Room or playing baseball on the lawn. Oh well. We’ll see. I will continue to give it a chance, but really hope they find a new art team for it, because the faces are terrible and the inking heavy.