These are a bit late, but if you’re like me you don’t get all your books every week but go pick them up every 3 to 5 weeks, so they might still help you decide what to keep on the pull-list, what to drop, or what to seek out in back issues or trade paperback collections.

And so Coates’s first 12-issue run of Black Panther ends. While I think you can see his growth as a comics writer since issue #1, he still has a long way to go, and needs to be teamed with someone more inventive and free on the art. Still, the ending was satisfying, even if it was what I imagined would happen from early on. My only disappointment was that Zenzi was not won over and made part of the new coalition government, her rejecting her former ties to Tetu. I had decided that I would not be getting the next volume by Coates, but now I think I will.I want to see how he handles re-building a nation and a new government.

I was kind of surprised when I saw this crossover between DC’s Hanna-Barbera properties and the DC universe itself, but since Booster Gold is a goofy sentimental favorite and I am loving Russell’s The Flintstones I decided to pick it up. Plus, RIck Leonardi’s work, which I had not seen since the four-color newsprint days of the 80s, seems to have blossomed with contemporary coloring. It looks great. The resolution of this story lines up with Russell’s Flintstones work. A Jesus-like alien figure ends up having his claims used as justification for destruction and conquering because of Booster’s typical bumbling, but the Flintstones themselves seem superfluous to the story and could have easily have been any old mythical “stone age” people, which is a real shame.  Still, it was fun and pretty to look at. The back-up (by Jimmy Palmiotti, Amanda Conner, Pier Brito and Alex Sinclair), which is an intro to an upcoming Jetsons comic book series, is weird. It turns out Rosie the Robot is inhabited with the consciousness of George Jetson’s mom! Will she still be the maid? She is certainly drawn to look like a sexy robot French maid, which makes the choice even weirder. Not sure if I will be picking up the new series (probably not), but I have to admit this strange turn of events makes me curious.

Finally, an issue that feels like something is happening, and I like it. The problem is that this series has taken four issues to do what should have been done in only one, or two at most (with more characterization). I understand the slow burn, but a slow burn should accomplish something, not just be slow for the sake of slow. Still, even though this title remains on the bubble, this issue saved it from being cut, and I hope the rising action of it is a sign of what is to come. I will add, however, that the art in the final two-page spread reveal makes it very hard to comprehend what Jennifer Walters is seeing/facing, which may be intentional, but its rendering is a mess. 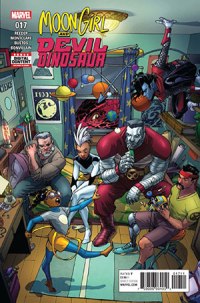 This book remains pitch perfect in narrative tone and visuals. How does Lunella end up on the Metro North heading to White Plains with the (current version of the) classic All-New All-Different X-men? Who knows? Who cares? The story still makes sense and is fun and weird, and temporarily transported to the 80s, Wolverine returns to his classic way of talking that I never knew I missed so much. It even has Forge! The only characterization that felt off was Nightcrawler, who was a little too kiddish and impatient to sound like the Kurt I know and love. Colossus doesn’t speak at all, but that was less jarring, as he was frequently the quiet type.

I love this book. I wasn’t sure what was going to happen once the story moved away from the immediate disaster of the bus crash, but I love how the mercilessness of these students’ lives seems to go on even when they return home. In fact, the quality of suffering threads through their lives to varying degrees, and remains compelling. The depiction of being hard of hearing is very well done in this issue, but the feelings evoked by the change that comes with college and late adolescence are especially poignant. 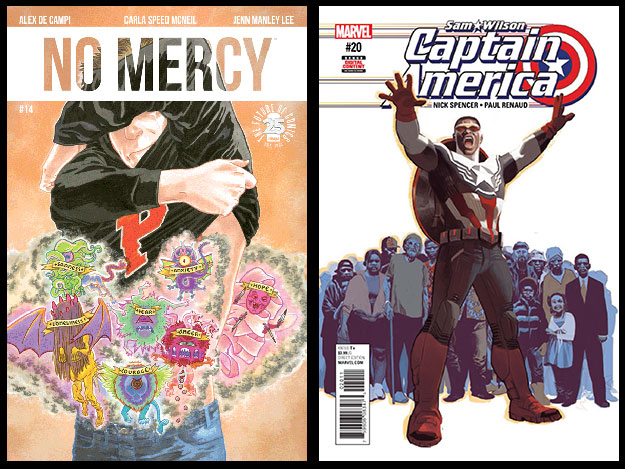 I guess I can’t expect a Captain America comic to spend time exploring the nuances of non-violence as a strategy of protest versus pacifism as a philosophy, or how people might be in the right to destroy property and physically resist police as another strategy, but the rhetoric was laid on a little thick. And even when Sam Wilson’s preacher brother gives his sermon about righteous anger, it feels undermined by the needs of the story and Marvel to reinforce a certain hegemonic framework that somehow ennobles vigilante justice while depriving oppressed people their own right to physically resist. As a result, of course, it implicitly makes state violence as acceptable in relation to violent protest. I know. I can’t expect it, but that doesn’t mean I would not love a Captain America that calls on us to burn this motherfucker down. I am buying this comic for its direct engagement with the current cultural discourse around police misconduct and violence, mass incarceration, and the vile sin that are private prisons, but I don’t know if I can recommend it as a comic. The fact that Renaud did the art in this issue as opposed to Acuña probably doesn’t help, but visually it lacks imagination. And while I guess I could laud it for all the brown and black faces in most of its scenes, the fact that it takes scenes of protest and riot (or funeral) to get that mitigates its progressiveness significantly.

I can’t believe this series is really over. Actually, I take it back. This series was so good and had so much potential that of course it was cancelled. As an ending, I guess it did the trick, introducing the new status quo of Jessica Drew’s life to the rest of the superhero community, but it also feels like just a beginning. This is the point where an ongoing serial comic book should really settle in to explore characters and setting, but in the current Marvel approach that never happens anymore. It seems (as I suggested in my post on the lack of a Fantastic Four title) that Marvel doesn’t know what to do with books about family, about children, about relationships, about something other than endless cycles of time-travelling alternate reality stakeless violence. I will miss this book, and the fantastic art provided by Javier Rodriguez and Veronica Fish. On the bright side, I guess its cancellation makes room for adding Hopeless’s upcoming Jean Grey solo book, but I can’t say I’m as excited for it.

I just don’t understand how any fan of Marvel’s Thor could not like this series. It is crazy and epic with a necessary touch of humor, and gorgeous art. Sure, this issue’s panels were a little busy and unnecessarily askew, but I can appreciate what Dauterman is trying to evoke. What I really love about his story is how the worlds of gods and superheroes blend so seamlessly, and the strangeness of X-franchise opponents (the Shi’ar) up against Asgard (which crossed over with X-books more than many would probably guess) works perfectly. Jane Foster Thor is the best Thor in a long long time.

This may have ended up even more wrapped up in the general Marvel continuity mishegas than I normally like, with references to Aaron’s “God Butcher” story line, the Original Sin 2014 event, Thanos stuff, and the Angela: Queen of Hel title, but I still liked how it capped off an adventure for the emo/aggro Odinson in something of an anti-climax that I honestly appreciated. It was as if Aaron realized that to have the original Thor running around with the Ultimate Thor’s hammer would have been weak sauce, so he had the character make a choice seemingly based on a nebulous sense of identity that only coheres in a meta- narrative sense. The muted coloration (which mars so many other books) works perfectly for this story. Of course, having some shadowy figure pick up the Ultimate uru hammer and become “War Thor” in the epilogue pulls the mini-series back into the absurdities of the shared setting in ways that don’t sit right with me for reasons I cannot put my finger on. Most of all, however, I like the story’s questioning of the very category of godhood in the Marvel Universe. Ultimately, I wish this could all be part of a singular Thor title. I think a monthly ongoing should create an expansive world and should be able to tell stories that occasionally look away from its titular protagonist.

On the Bubble: Hulk

* cancelled, but not complete.