I bought a lot of comics in these five weeks; a lot more than are reviewed here, but these are the ones I jotted down a bit about. 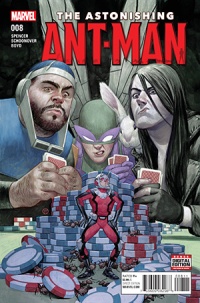 Astonishing Ant-Man #8 (released 5/18)
Writer: Nick Spencer
Art: Brent Schoonover (w/colors by: Jordan Boyd)
This issue is evidence that Nick Spencer is best when writing the bad guys. His Superior Foes of Spider-Man was excellent, and his current Image series, The Fix (about some crooked cops – see below) is wild. Astonishing Ant-Man #8 is funny as hell, because weirdo criminals in absurd outfits are worthy of mockery. The joy is in the B-list. Heck, these guys, Whirlwind, the Voice, Hijacker, might be D-list. The guest artist for this issue is great and totally someone I would love to see stick around for an arc or two. After wavering on the margins of my interest this book has returned to being one of my favorites.

Black Panther vol.6, #2 (released 5/11)
Writer: Ta-nehisi Coates
Art: Brian Stelfreeze (w/colors by: Laura Martin)
I am hoping this gets better. This issue has the classic feeling of a second issue of any new series back in the day; that is, it feels like nothing much happened.  I hope Coates gets better at writing comics, because Stefreeze’s art is solid and holding it down right now.

DC: Rebirth (released 5/25)
Writer: Geoff Johns
Art: Ethan Van Sciver and Gary Frank (w/colors by Jason Wright and Brad Anderson)
I assume that the myriad of rapid references to things like Flashpoint and Darkseid as a baby makes the right kind of sense to a certain kind of die-hard DC fan. But, I am not that kind of DC fan. I have liked certain series and some individual stories are among my favorites in the genre, but I am a Marvel kid at heart to this day, as the comics I tend to review and write about makes apparent. Anyway, this thing was written with a cudgel. The art is fine I guess, even pretty in places, but I could have skipped this “Rebirth” and just waited to see if individual titles were any good and coherent enough on their own to not have to follow stuff I am never very likely to follow, like Justice League or Green Lantern anything (I would read a good John Stewart on Earth book, however) to make them work. DC Rebirth does nothing to help a new reader. It even tells us on the opening page that we should read Justice League #50 and Superman #52 before reading this. I didn’t read either. And that’s fine. I accept that as a reader I need to be open to things I don’t understand, to develop the necessary knowledge of a setting and its history to deeply enjoy the story and characterization, but a good serialized comic also does something to help. This doesn’t. This is only mildly interesting in terms of DC’s use of Watchmen, which is so clearly evidence of their febrile inability to understand Watchmen except as just another simplistic take on superheroes and/or as a commodity to be exploited, that it might just be perfect in its terribleness. It is like the ire of a thousand Alan Moore rants about DC comics proved right at once.  Skip it.

The Fix #2 and #3 (released 5/11 and 6/8)
Writer: Nick Spencer
Art: Steve Leiber (w/colors by Ryan Hill)
Yo! What the fuck? This comic is fucking crazy! It follows a couple of self-destructive corrupt asshole cops who are as funny as fuck as long as you are willing to laugh about terrible shit. And well, honestly, I don’t know what else to do but laugh because I am tired of crying. Anyway, yeah my guess is if you like stuff like Archer (I don’t), you will like this. And if you liked Superior Foes of Spider-Man (which I loved) I think you will love this. 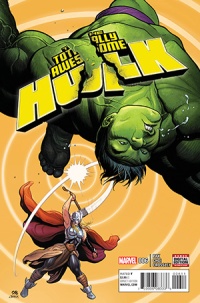 Totally Awesome Hulk #6 (released 5/25)
Writer: Greg Pak
Art: Mike Choi (w/colors by Andrew Crossley)
The story was pretty simplistic, and even the simple joy of watching new Korean Hulk interact with new female Thor was marred by the terrible art. The penciling was adequate, I guess, but in combination with the weird coloring it really turned me off. I know Frank Cho is kind of a douche, but I miss his art. It worked for this book. I’ll be flipping through the next issue before purchasing.

Moon Girl and Devil Dinosaur #7 (released 5/25)
Writers: Amy Reeder and Brandon Montclair
Art: Marco Failla (w/colors by Tamra Bonvillain)
So good! I even whooped a little in delight when I saw the payoff/cliffhanger at the very end of the issue. I do miss Bustos’s art, and while this was fine, I hope she will be back soon to make this book perfect.

Writer: Kate Leth
Art: Natasha Allegri
Really cute. The guest artist amps up the usual cuteness beyond the Archie-esque art to little cartoony caricatures that are just short of the big-headed “baby” figures of Skottie Young. Unfortunately, this style was not very good at capturing the necessary dynamism of a superhero comic. Heck, it did not even capture the movement necessary to reinforce the body language of a comedic comic. The story features an unrecognizable version of the villain Arcade, and pretty unexciting death traps (when most of the fun of the character is the over the top nature of Murderworld). I did appreciate that the story takes place in Coney Island, but generally this was a weak issue, which leaves me glad this is a one-shot story. The cover led me to think the Mermaid Parade would feature in the issue, but alas, no. At the end, Jessica Jones shows up, which brings us back to the Hedy plot that has been building in the first 5 issues and hopefully next issue will bring us back to the regular artist.

Writer: David Walker
Art: Sanford Greene (w/colors by: Lee Loughridge)
The power of friendship saves the day, but not Luke and Danny’s, but their foes. Nice touch.

Spider-Man vol. 2, #4 (released 5/18)
Writer: Brian Michael Bendis
Art: Sara Pichelli (w/Gaetano Carlucci on inks, and Justin Ponsor on colors)
It could be that I don’t know the Ganke character well enough to make sense of his behavior, but this comic seemed really weird in terms of tone and interpersonal interaction. It was clunkily written, and even Bendis’s usually patter-y dialog felt flat. The most interesting part was Goldballs (I really am not down with homeboy being named “Goldballs”) asking if Ganke and Miles were a couple. They are a couple, just not a romantic one. Not enough happens in these comics. This whole issue would have been four pages in the Ditko or Romita days. 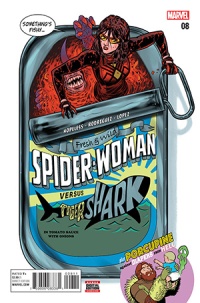 Writer: Dennis Hopeless
Art: Javier Rodriguez (w/inks by Alvaro Lopez)
I skipped issues 6 and 7 because I am not down with mandated multi-title crossovers. If a story is worth telling then it is worth keeping in one book with guest stars, rather than dictating what additional comics I must buy. So with #8 we have a single issue story that while very good (Javier Rodriguez is in top form here), needs to re-establish the status quo in a book only 8 months old. And yet, when a serialized superhero comic is as good as this series is even relatively simplistic stories of an evening fighting Tigershark, while juggling the questions of the babysitter are delightful because of that rich art and the writer’s ability to evoke the complex and contradictory emotions of parenthood. If this book could get a year or two uninterrupted by event books, it could be as good as Matt Fraction’s Hawkeye. Oh, and fantastic cover!

The Mighty Thor vol.2, #7 (released 5/25)
Writer: Jason Aaron
Art: Russel Dauterman and Rafa Garres (w/colors by Matthew Wilson)
I love the raw crayon-like art used in this telling of a Viking legend. The conceit of this (and the last) issue is that this is a tale being told by Loki to Dario Agger as they make a deal which will or will not (who knows with Loki, and that’s how it should be) destroy the new Thor. The legend is presented between book-ending portions drawn by Russel Dauterman in his usual gorgeous style (I will say again, best Thor artist since Walt Simonson).  The rawness of Rafa Garres’s art for the middle portion is perfect for the story, like cave drawings found in a Greenland volcano. I LOVE that Marvel is willing to take these kinds of chances with the book, because I can’t imagine that this is the average superhero fan’s cup of tea.

All- New Wolverine #8 and #9 (released 5/18 and 6/1)
Writer: Tom Taylor
Art: Marcio Takara (w/colors by Jordan Boyd for #8 and Mat Lopes for #9)
I was considering not getting All-New Wolverine #8 since it is labeled “Road to Civil War II,” but thankfully there is nothing in it that remotely smells like crossover garbage. Instead, while the idea of X-23 working for SHIELD/Maria Hill is stinky, the idea of Wolverine jumping down the gullet of Fin Fan Foom to retrieve Old Man Logan is an aromatic pleasure.  Sorry, smells are a facet of the story. I got carried away. Issue #9 is great as well, though the quip-y bits got tired. I think I like guest appearances by other mainstream Marvel characters (in this case Iron Man and Captain Marvel) less and less. Or maybe it is just that I dislike Iron Man so much, because thinking back Captain Marvel’s presence was fine.

Wonder Woman: Rebirth (released 6/9)
Writer: Greg Rucka
Art: Matthew Clark and Ian Sharp (w/ inks by Sean Parsons and Ian Sharp, and colors by Jeremy Colwell and Laura Martin)
I guess I should have known that all these “Rebirth” titles would be hella meta. At least, I am assuming that based on this issue and the DC Universe: Rebirth issue (reviewed above). Anyway, I would love love love a Wonder Woman title I could like and follow. I love the character. The Marston and Peter stuff is fascinatingly weird and wonderful. I religiously watched the TV show as a kid. But there had never been a recent comic version that appealed to me. I was hoping Rucka would be the one to achieve that, and I plan to give his regular on-going Wonder Woman series a try, but this one issue did not entice me, and if I were on the fence about giving it a try this would have pushed me away from it. All that being said, I hope the art is better in the on-going. Even if you plan to try the on-going, I think it would be fine to skip this.