Remember when I said this comic was mostly terrible with only very occasional signs that it could ever be good?  I take it back. It will never be good. I am done with it.  The art in the issue is a vomitous mess.  Perhaps the style could work in another genre or with another writer, but here it does nothing to supplement the story-telling.

Matt Kindt continues to impress with his fantastic series. This issue begins with a mysterious subterranean journey that evokes the rich dark tones of Odysseus in the Underworld mixed with the strangeness of a Williams Burroughs story. There is a continued sense of dreams inside dreams, death unfolding into life, collapsing into death and the suspicion of the real. Furthermore, in this issues, its marginal meta-content begins to move from subtext to text, effacing the surface of the images itself. It is beautiful.

The Multiversity: Society of Super-Heroes (released  9/24)

A waste of five bucks. The art is kind of nice and I tend to love stories with alternative versions of superheroes, especially b-list superheroes I tend to have affection for, like Dr. Fate, but this story (if you can call it that) was a pointless mess.

This may verge on the inappropriate, but the first thing I noticed about the cover of this issue is how they drew Ororo with Serena Williams’ ass, which I tend to give the side-eye to. . . unnecessary, but there is that unwritten rule: a female superhero’s ass and/or breasts must always point towards the reader. Anyway, after a strong start with the first issue and a slightly less compelling second issue, this third issue feels like mostly a failure.  Storm’s voice just didn’t seem right and having her return to the site of her role as “goddess” seemed like a wasted opportunity to have her address the colonist notions written into her original origin in a meaningful way. Lastly,  I was lost in regards to the backstory of her relationship with Forge (I haven’t seen him in a comic since the late 80s, did he become a bad guy at some point?).

Despite declaring itself a “God-Sized Issue” on the cover, the final issue of this portion of Jason Aaron’s run was a big snooze. It was basically a deep breath before the new Thor series begins featuring the female Thor, which he is also writing and I am excited about, but as a finale of a mostly good run this mostly sucked.  And this is coming from someone who loves the anthology format for comics with multiple stories, which this is. The framing device is great, because who doesn’t love far future King Thor’s granddaughters, but the origin of Malekith doesn’t really tell us much new about him in a way that matters. The “twist” that leads to his disfigurement doesn’t really follow his life story before that.  The young Thor story is failed by horrendous art by Simon Bisley, and the scene of a Thor deemed unworthy and unable to pick up his hammer is undermined by the fact that the issue doesn’t even try to tell us what is up with what I assume was something revealed in Original Sin or some other crappy crossover summer event.  Whatever happened to revealing life-changing events of a character in their own book?  This gets a big MEH.

Well, that’s enough of that. This comic is all style and no substance (at least so far) and kind of a banal mimicry of a compelling style at that. It is the worst example of the decompressed story-telling style that has pretensions to a slow-burn, but is really people standing around making nonsense statements of faux-profundity.  I am going to go back and re-read all four of these to see if a closer reading will help, but I doubt it. Aside from an interesting cast of somewhat diverse characters, this comic seems like the results of a series of strung together “wouldn’t be cool?” conversations (like wouldn’t it be cool if the incarnation of the god Baal were a Kanye West analogue?). It should be cool, but it is boring.  I really wanted to like this and reserve the right to return to it when it is collected and I can flip through a few issues at a time, but as it is going right now, I am starting to think that Gillen and McKelvie are mad overrated, son. 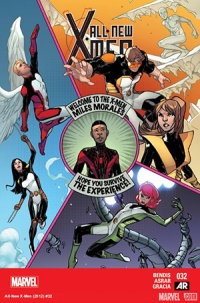 I picked these up because I was interested in seeing how it would deal with the introduction of Miles Morales, or perhaps more accurately, the introduction of the time-displaced original X-Men of 616 (will the time they come from ever be re-designated when it is inevitably decided it was an alternate past?) to the Ultimate universe.  I actually love the idea of the young X-Men running around, the problem is I hate Brian Michael Bendis’s decompressed story-telling style and thus felt like nothing really happened. And guess what, nothing did.  I know it is a little late to complain about that kind of story-telling in contemporary superhero comics, but it does makes me feel like every issue is a rip-off.  Maybe if they were $2 instead of $4 I could tolerate it, but nope.