Most of these issues are ones that came out between July 1st and August 12th, 2015, except for Bizarro #1. 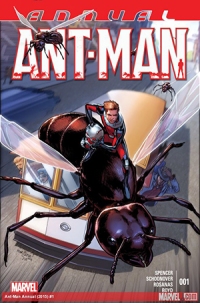 Fun. This issue is a great and irreverent homage to Hank Pym, and introduces a queer PoC legacy character. Let’s hope we see more of the new Giantman in the issues to come of the new rebooted Astonishing Ant-Man.

Bizarro #1 & #2 (released 6/03 and 7/1)
This is a. . .well, bizarre comic. The art is the star of both these issues, having Gustavo Duarte’s cartoonish pencils not only upsets the usually self-seriousness of the superhero comic ideal, but of course it perfectly fits Bizarro as a character and the strange story of his roadtrip to “Bizarro America” (aka Canada) with Jimmy Olsen. The colors and inks are fantastic, too. Visually, this is an outstanding comic worth seeking out. The plotting is great, too, what with the a villainous used car dealer with powers granted by aliens in the guise of Egyptian gods, and finding a literal ghost town with who I guess is the great-great granddaughter of Jonah Hex, but the dialog’s disorienting effect is is varyingly frustrating and brilliant. I guess we’ll see as the (apparently) six issues series continues, but the inconsistency of Bizarro’s Bizarro-speak makes him even harder to understand. 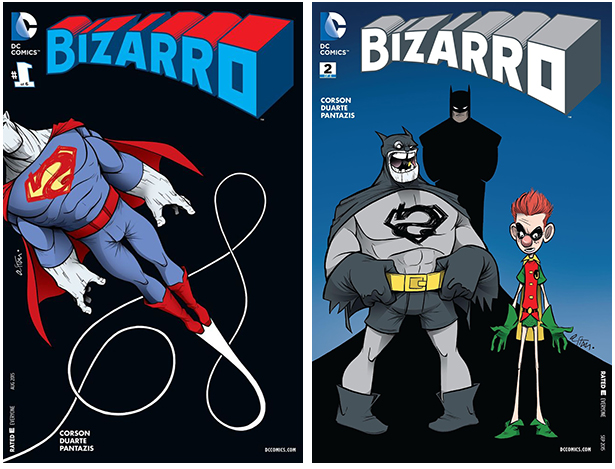 Kelly Sue DeConnick knows how to pace a comic. We know this already from her work on Captain Marvel. I don’t know what role Kelly Thompson has in her position as co-writer of this series, but whatever it is, it seems to complement the confidence with which DeConnick writes in order to present what might be the best of the Captain Marvel series! All in a stupid summertime crossover event reboot thing to beat all summertime crossover event reboots things! This comic does such a good job of creating an insular Battleworld. . uh. . .world. .. that the crossoveriness is a palpable sense of mystery, rather than seeming like an awkward imposition. David Lopez’s art remains fantastic. This is only two issues of I don’t know how many (four?), but so far it seems like a winner.

Hawkeye vol. 4, #22 (released 7/15)
Finally, the final issue of Matt Fraction and David Aja’s acclaimed run on Hawkeye. I find it hard to review this issue because it has been so long since issue #21 came out (February, and I think even back then the release schedule was a bit scattered). Shit, a whole other Hawkeye series was started and gone several issues since then! The art and pacing seem as fantastic as always, but the pay off is hard to digest when everything else seems so foggy. I’ll have to go back and re-read the whole thing to give this issue a fair shake.

I like this series for its art and its chop socky superhero aesthetic, but unlike Captain Marvel and the Carol Corps, Haden Blackman makes some choices that make this portion of Battleworld a little harder to swallow. Making Namor into a kung fu master that can be defeated by Shang-Chi (oops, spoilers!) means either Namor is not really Namor (a character most frequently given near Hulk levels of strength) or that Shang-Chi is much more powerful than being merely a Bruce Lee clone with mystical associations. I think the reality that Blackman writes is somewhere in between, since Shang-Chi’s hands turn into blades at some point to piece Namor’s lungs. . .or something. Still the art is great (except for Shang-Chi’s face, which still bugs me) and the kung fu action is exciting and fun.

Master of Kung Fu vol. 2, #4 (released 8/12)
Unfortunately, the conclusion of this series (at least it feels like the conclusion, the comic itself does not let the reader know the limits of this series) feels anti-climactic. There is no sense that the things Shang-Chi uses to defeat his father (oops! spoilers! :P) developed from anything within the series itself. There was no sense of what was at stake, what sacrifices were being made, etc. . . The actions of Shang-Chi’s opponents also make little sense, especially Elektra (or who I think is Elektra, she is called “Red Sai” here). The art remains lovely, especially the coloring, but the layout of the panels is also lackluster. Disappointing.

Ms Marvel vol. 3, #17 (released 8/5)
Kamala finally gets a team up with Captain Marvel, aka Carol Danvers, the former Ms. Marvel, and her excitement is infectious.Unfortunately, however, the muted coloring of Captain Marvel herself is a weird choice, and the tie-in to the Secret Wars event made the issue lack the luster I am used to. I am not following Secret Wars, but my understanding is that its events include the superheroes of Earth conceding defeat and essentially saving themselves, reinforcing their elite status and greater value than the lowly non-powered peons they once deigned to fight and die for. The conversations between Carol and Kamala echo that ugly situation. She essentially says Jersey City and all the brown people depicted there are not worth the time of any big-time superheroes, leaving it all to a teenage girl new to the hero game. It left a bad taste in my mouth, and I will be happy when we can move past this junk and get back to the local stories that make the Ms. Marvel title work.

PLORPtastic! This title continues to impress. When Dan Slott is on, he’s on. And you know I love Mike Allred’s work. He might be my favorite comic artist working right now. I can see how his aesthetic takes Slott’s ideas to another level. The comic isn’t lying when it lists them both as “storytellers,” not separating the writing from the art. Anyway, the simultaneous sense of the intimate and the cosmic, with a dash of warm humor, just makes this book a real pleasure to read. I can’t recommend it enough. Yeah, yeah. This is technically part of the whole Secret Wars thing, but it could just as easily not be, and that matters to making it work as a story.

The Unbeatable Squirrel Girl #7 (released 7/1)
This issue was delightful and made me wonder why I ever considered dropping this title. It is light, funny, well-drawn, of the moment and using obscure elements of Norse mythology to bring in Ratatoskr, the Squirrel God of the World Tree. and a reproduction of its Wikipedia page! Great stuff!

Star Wars vol. 2, #7 (released 7/29)
This felt like a filler issue. It was a filler issue. It has a yawn-inducing tale of Obi-Wan watching over Luke in his youth on Tatooine, unable to use his Jedi powers openly for fear of drawing the attention of the Empire. The story simply did not have the same level of tension and action that the first six issues had, and the change in artist (I assume a fill-in artist until Stuart Immonen takes over for John Cassaday) didn’t help to carry the story. The colors were muddy. The faces were hard to read. The first low point in this otherwise crackin’ series.