NB: I am really late with these, but life has been a little hectic with the new job, Thanksgiving travel and all, so going to pick up comics, let alone read and review them has been low on the priority list. 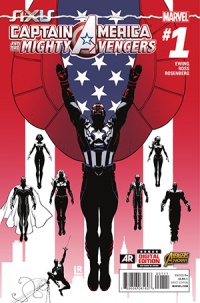 I got this because I am interested in the new Mighty Avengers and feel like I gave up on the previous series too quickly. The problem was that the last series opened as part of a crossover event (Infinity) and I usually find that shit boring. Unfortunately, this series also starts as a kind of fallout of Axis (whatever the fuck that is), and Sam Wilson, formerly the Falcon, the new Captain America has turned bad, as has Tony Stark and Luke Cage. It is almost as if black characters can’t just be left alone long enough to try to be heroes and always have to have a “dark edge.” Having to read right-wing radio talking points in Sam Wilson’s mouth was more revolting that it was compelling. It is kind of a shitty comic, but I will probably give a chance to resolve this plot arc and start up something new.

This is a great issue. A lot of fun. You can tell it is going to be by the picture of Carol looking like the love-child of Dazzler and Paul Stanley of KISS on the cover. Most of it is in (often strained) rhyme as Carol visits some fantasy planet to aid Lila Cheney, a character I never even knew existed until I listened to Episode #22 of Rachel and Miles X-Plain the X-Men. I like how the issue undermines the fairy tale genre of marrying the prince, by having the prince be a nice guy who doesn’t want to force some poor girl to marry him, but also wants to respect the traditions of his people, creating a moral dilemma for Captain Marvel to use her rough-edged diplomatic powers to resolve. I also love how De Connick figures out way to have Carol not only kick ass as a powerful superhero, but also look for non-violent and reasoned, but no less passionate solutions to problems. I am won over by this series again, at least for now. Let’s hope it will be a while before Rocket Raccoon or the Guardians of the Galaxy show up again, since I can’t stand them.

Even beginnings aren’t beginnings. Don’t believe it. Or anything. Not even yourself. The closest thing to a review of this issue I can give you is to just point you back to this blog post, “On the Interpretation of Mind MGMT.”

So far, I like this issue best of the Multiversity issues I’ve picked up (have there been only three), but then again I didn’t like the others much, so that isn’t so hard. Still, this one is fun and I love the US Weekly or other celebrity tabloid-like cover for the issue, which tells the story of a DC Earth where the descendants of the DC heroes we know live in a boring and crime-free world thanks to an army of Superman robots. Instead, they are simply that world’s celebrities – partying and participating in the minor, but overblown dramas that makes the TMZ machine operating. Unfortunately, not enough was done with the idea, because it has to cleave to the “event” narrative. It also tries a little too hard in places to be winking and self-referential. It does nothing clever with it though there is something that strikes the right note when Batman and Superman of this world (Damien Wayne and Kon-el) are aware of their “brand” as “World’s Finest.” Ben Oliver’s art is quite lovely, though. 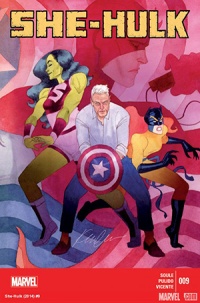 I can’t express how sad it makes me that the She-Hulk series is ending. I am liking Soule’s writing on this book (you’d think it was impossible based on the shittiness of Death of Wolverine) and I really love Pulido’s art. These two issues are the end of the arc involving the wrongful death suit against Steve Rogers, wherein Jennifer Walters has to face off against Matt Murdoch in court. Issue #10 has a great cliff-hanger, but I am worried that the whole “blue file” mystery will be ruined by having to be resolved in the two remaining issues. 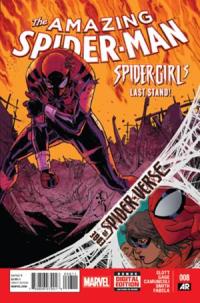 This feels like what a superhero comic should be like. The team-up with Ms. Marvel is awesome, and the fight against the alien bad guy is goofy. The Spider-Verse stuff where Spider-Girl’s parents are devoured by who I assume is Morlund’s brother or something was unnecessarily dark for the MC2, but whatevs.

This series continues to tease with its second issue, as it still does not reveal the identity of the new womanly Thor. Still, fighting giants and Malekith under the sea? Check. Fan-friggin’-tastic cover? Yep. Sounds good to me!

The title of the first story alone is enough to tell you how miserable it’d be to live with the expectations embedded in them: “Too Fat to Frug.” But “Two-Faced Woman” is a horror story in every respect. I’ll be be writing about this anthology series and the stories in them at more length some time in the coming year.