This was given as a bonus issue in SSM #30. I would never have bought it and reading it did nothing to convince me that I would have regretted that decision. Full of La Femme Nikita and Bond action-espionage cliches, this issue does nothing to complicate her identity, establish the direction of the series (except perhaps to indicate the fruitless excavating of tired tropes), or even develop a desire in the reader to see “what happens next.” It is a near total failure, if not for the art, which was lovely.

Captain Marvel vol 8, #2 (released April 9, 2014)
Not really feeling this cosmic outer space stuff, and the sub-par art is not helping. Furthermore, I am not sure I am fan of the current characterization of Rocket Racoon and the Guardians of the Galaxy – at least as depicted here. I’ll be dropping this title soon if it doesn’t improve, which is too bad.

I am going to continue to get this series through the first arc, assuming it lasts that long because I am trying to put together a post (or series of posts) about Latinos in Marvel Comics, but boy does this one hit all the stereotypical stops along the way of the origin story of the newest motorized hellspawn anti-hero. Expect more on this title in the future. 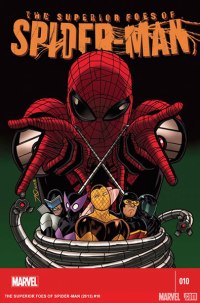 Superior Foes of Spider-Man #11 (released April 9, 2014)
Another fill-in issue with stories about Grizzly and the Looter that aren’t by Spencer & Lieber. So disappointing. The art and writing are sadly lacking. So disappointing. This series is on the verge of cancellation already, this kind of thing doesn’t help.

Camuncoli’s art continues to leave me unimpressed. The moment where Peter Parker is finally back in his own head is ruined by his inability to draw a recognizable Peter Parker. The whole thing was hackneyed sentiment, which may be par for the course for Spider-Man comics, but really leaves the promise of exploring the character via Doc Ock’s possession unfulfilled and a little too pat. Thumbs down.

Superior Spider-Man Annual #2 (released March 19, 2014)
The kind of comic you immediately regret buying. The art is better than Camuncoli’s stuff and it focuses on Ben Urich, so you think why not? And then the whole thing feels kind ancillary hackwork, esp. for being a buck more than a typical issue. I do like the Wraith though – would like a mini-series for her. (Note: A liked this better on a second reading) 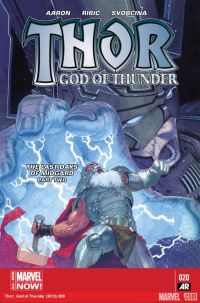 In the present, Thor as pre-emptive anti-corporate eco-warrior, in the distant future, old man Thor fighting an old Galactus over a scorched Earth. This shit pushes the right buttons for me.