The Incredible Hulk is one of my favorite Marvel characters, and when he is teary and snot-nosed I love him even more.

There is a particular era and version of Hulk I like the best, mostly from the 70s where he spent most of his time in Hulk form wandering the wilderness—mostly desert or scrubland, but your occasional forest or mountain region. It was during this time that all the Hulk really wanted was to be left alone. He is the quintessential misunderstood gentle giant, the monster that hates his human form, Bruce Banner, because to him being tied down to the responsibilities of a banal life, beholden to some government scientist job, hated by your girlfriend’s dad, are all more monstrous than he could ever be.

But the Hulk is not a hypermasculine fantasy of freedom (or at least, not only that). If anything, this era of Hulk is in a latency period. He is childlike, but suffers from a constant adolescent anger that can never be quelled. And it is there that my identification with the Hulk began, because I was often one of those sour “leave-me-alone-nobody-understands-me-I-hate-the-way-the-world-demands-that-I-be” kind of teenagers—and to some degree I am still like that (maybe that’s why so many of my friends josh me about how “crotchety” I am).

If Banner’s anger is inextricable from his immediate social world, the Hulk’s anger is more basic, primal and constant. It is the anger of being. It is an existential anger of “I didn’t ask to be born” that most people grow out of, not because it isn’t real, but because what else can we do about it aside from conform? To give in to those demands? Those who don’t stand out like a big green monster and have to live a life of eternal anger, are avoiding a constricting reality. As the Hulk often realizes, in the atomic age from which this existential dilemma springs, there is only just so much wilderness left in which to wander unmolested—that too, is a reason to be angry.

It’s for that reason that the scene in the recent Avengers movie when Bruce Banner shows up to fight the alien invaders and says, “That’s my secret. . . I’m always angry” transforming instantly into the Hulk works so well. The Hulk even at his gentlest is always angry. He can go to sleep and wake up angry—remaining the Hulk no matter what. In fact, I would argue that it is the Hulk’s sensitivity that makes him angry, like in Dazzler #7 when he comes across test-subject puppies in a university lab and insists on freeing them because they are locked in a cage like the soldiers would to do to Hulk. Hulk is the Hulk because it is better to be angry than sad. 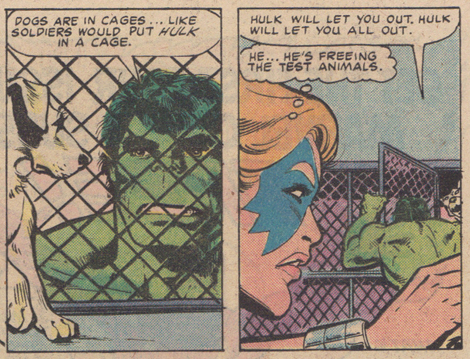 The panel at top is the last one in Hulk Annual #8 (from 1979). In it Hulk befriends a lovely Canadian girl and her cat in a log cabin out in the woods, but the Canadian government, worried about having the Hulk within its borders send their official monster, Sasquatch to suss out the situation. However, like a dick, Walter Langkowski, decides he wants to prove his strength against the Hulk and attacks him. In the ensuing fight, Hulk, who just wants to be left alone gets so mad, he ends up frightening his new friend (who spent most of the fight trying to get Langkowski to stop), and it is upon seeing that reaction the Hulk flees.

That last panel with a teary snot-nosed Hulk is the pay off for me. The pathos it evokes perfectly captures my love of the Hulk whose deep sensitivity makes him too scary to be loved, just as the over-the-top fisticuffs of the superhero genre captures the tumult of the existential immediacy of adolescence.