Brief reviews of comics released November 25th or December 2nd (except for Astonishing Ant-Man #2, which came out the week before).

I am a fan of the second volume of FF, the comic that featured Ant-Man, She-Hulk, Medusa and Ms.Thing as a back-up Fantastic Four and  faculty for the Future Foundation, while the actual FF were off exploring infinite space or something. However, while that title was often playful in tone, the Scott Lang of that series—despite suffering from deep grief over his then dead daughter and being somewhat myopic because of that—was hyper-competent and had a stronger moral compass than Nick Spencer’s down-on-his-luck B-list-hero-eternally-fucking-up version that feels like a fugitive from Superior Foes of Spider-Man. That is not to say I don’t like this new version, it makes for an entertaining story, but in this issue Spencer does his best to resolve the tensions between these two Scott Langs, and brings back Lang’s ex-girlfriend Darla Deerling (aka Ms. Thing) in service of doing that. The story explains what happened to the relationship (they weren’t a good match, Scott ghosted) we have not see in comics since that Fraction/Allred run on FF. While you have to squint a little and feel generous towards the tone of the new book, Spencer manages to frame the past in way that manages to account for the disparate characterizations. But what is even better is that re-introducing Darla is part of a new plot thread including her secret reality show, so there is a sense of developing the serial. I like this book, but I think Spencer could pull back on the humor just a tad in order to make those punchlines a little punchier when they do hit.  Rosanas draws a great Ms. Thing, but sometimes his figures are a bit stiffly drawn. 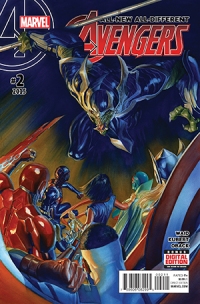 A definite improvement over issue #1. There is good urban hero on villain combat action with decent characterization and continued awkward teen conflict between Ms. Marvel and Nova that was not as sudden and stilted as it was in the premiere issue. It seems like it took an issue for Waid to get a sense of the voices, but Kamala and Miles “sound” right to me.  As for the art, I loved the team fight choreography, full of lots of energy and movement and pathos – a lost art in superhero comics. So kudos to Adam Kubert. Oh and classic late arrival by Thor leading to a tidal wave of a cliffhanger! 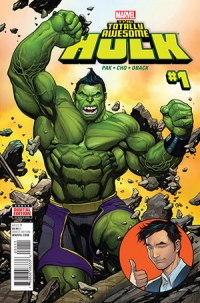 Wow. A Marvel comic with a Korean-American protagonist written and drawn by Korean-Americans. It shouldn’t have taken so long. This comic is fun, and Pak does a good job developing the tensions and voices in his first issue. However, Amadeus Cho as Hulk is having trouble controlling his impulses and in particular his libido, making him the young male version of She-Hulk. Thus, what comes off in She-Hulk comics as brazen play with gender roles and representations of female desire, comes off as typical icky male horniness. This, in itself, is not a bad thing, but I also think it will be something to handle carefully as to not recapitulate a common uncritical narrative of male desire. I will continue with this title if only because I am fascinated by representations of ethnicity and desire, but also because a young Hulk beating up monsters and shrinking them down is hecka fun! Still, the appearance of a Frank Cho big-boobed jungle-woman queen of the monsters at the end of the issue does not fill me with confidence that this will not be more than a one note comic. Then again, Pak wrote Storm, which had its moments of reflection on politics, culture, race and gender, so it remains to be seen how it will play out between the two main creators.

I have a problem. I am a big fan of Devil Dinosaur. I own the complete original Jack Kirby run, and I have made it a point to seek out his other crucial appearances. I am also excited by the idea of a Marvel comic starring a young black girl genius. The problem is Moon Boy, or rather the fact that through direct association Lunella, the young black co-star of the series is meant to be his equivalent. Yes, a black girl is the equivalent of a brown-haired prehistoric monkey boy that looks like Chaka from Land of the Lost. SMH. Perhaps the fact that Moon Boy appears to die just as Devil Dinosaur travels through a mystical portal to appear in modern day Marvel Universe Earth is meant to categorically close the door on the comics’ past with racially questionable prehistoric men, and usher a new era of better representation. I hope so, because so far? So far, despite this one glaring point, this comic is great. It perfectly, if hyperbolically,  captures the alienation of the hyper-intelligent child of color. Plus, the art is wonderful. The colors are amazing and Bustos faces are great. Get it.

Paper Girls continues to build the intensity and the mystery of whatever the heck is going on in the wee hours of Halloween night (or is it All-Saints Day morning?). Is there some kind of war or game being played out between aliens? Time-travelers? Is it the Rapture? Ronald Reagan appears in a dream-sequence. Elsewhere in the book other teenagers deal with the usual fraught sexual politics of adolescence just before being disintegrated. I’m still not sure what’s going on, but it doesn’t matter: I am down for the crazy ride. You should be reading this. Right now Image is putting out a ton of great titles, and they need support. I also plan to get the first trade when it comes out.

Sadly, this is the last issue of the new Prez series for a while, though I hope not forever. What was supposed to be a 12-issue series has been cut into two 6-issue series, but I’m not sure if there is an announcement about when the second set of six is supposed to come out. This is especially a shame because with issue #6  Prez finally feels like it is fulfilling some of the wacky promise of the less-than-stellar original series.  Here we find the young president finally dealing with a legislative crisis, the lobbying influence of corporate interests, and a pandemic of cat flu, which is killing tens of thousands of Americans.  The corporate powers are trying to use the crisis as an opportunity to get a bill passed that lets them copyright the DNA of living things in return of the promise of a treatment for and eventual cure for the cat flu. Meanwhile, the president’s approval rating (on Facebook) is plummeting because of how she is handling the crisis in a nation that loves both cats and not-dying equally. There is also a subplot with the military drone that gained sentience and has been taken in by a progressive church congregation. It has determined it is gendered (a woman), attends LGTBQR (Lesbian Gay Trans Bi Queer and Robot) support meetings and has accepted Jesus Christ as its personal savior. It applies for and gets a job in the secret service, since the rest have quit in response to the number of them that keep dying or in protest over the cat crisis. It is weird and funny stuff, and the comic feels like it is just getting going. . .so let’s hope DC isn’t lying and we will actually see more. Why this isn’t a Vertigo title is beyond me. It might get better marketing if it were.

There is something about this Vision series that reminds me of American Beauty or The Ice Storm, but as imagined by Shonda Rimes. And as someone who eagerly awaits every ridiculous episode of How to Get Away With Murder, that is a high compliment.