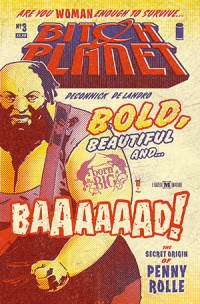 Amazing and brutal and heart-breaking and bad-ass and. . . and. . . and. . . If you are into comics and not reading this there had better be an economic reason, but it will be in your library soon enough, so no excuse then! 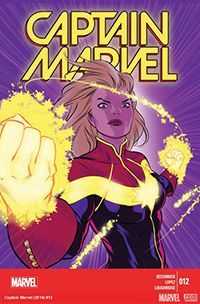 Now we’re cooking with gas. Carol returns from her quick trip to Earth to find her friend and her cat gone and her ship out of operation. For an issue that is for the most part Carol talking to the AI on her ship and racing across the galaxy this somehow captures just the right tone for superhero adventures in space – including a beautiful two-page splash of a cosmic phenomenon called “The Endless Envelope.” I am happy to stick with this title at least through this arc, “The 7 Seconds Before You Die.”

A nice little one-and-done story featuring a Valentine’s Day school dance, teenage love, Loki and punch spiked with truth serum. The story felt a little short, not because it was a one-shot story, but because comics in general are too short as compared to the Bronze Age stuff I grew up with. Also, while the fill-in artist did a good job, I miss Alphona’s art, which is a central part to what makes the series work. Let’s hope he comes back next issue.

At this point I think I am only getting all the Multiversity books to sell a complete set on eBay when this series is done. This issue is just another sketch, not even a story, a gesture towards something that is pale echo of Mark Millar’s wildly overrated Red Son, and more directly the less well known, but more interesting short story by Kim Newman entitled “Ubermensch.” Furthermore, it fails to complicate the identities of these versions of the characters or the idea what “America” means, and Jim Lee’s art is uninspired. Grant Morrison is phoning it in at this point.

This is the final issue of this run of She-Hulk and I am sad—sad both that it is ending and that the ending feels to rushed and unsatisfying. I quite enjoyed both Pulido’s art and Soule’s story (at least as it seemed to develop), but in the end the joy of the former could not make up for what lacked in the latter. I would think that the sudden resolution to the story is a result of the cancellation, but if we are to believe Soule’s note at the end of the issue this was what he originally intended all along and what he pitched. Personally, I don’t believe it. For once there seemed to be the kind of long-ranging slow-burn decompressed story in a contemporary comic that I could jive with—it was constructed that way—and then this happens. It looks like She-Hulk is going to be regular in G. Willow Wilson’s co-written (and terribly named) A-Force, so let’s hope we get some satisfying Jennifer Walters action there.

I was conflicted about picking this up because it has its origins in the current volume of Amazing Spider-Man, which I am not interested in, and because flipping through it the art was generally not to my liking, though some individual scenes seemed well done. . . but how could I not check out a female Asian-American superhero comic? How could I not at least give it a chance? Well, the chance has been given, but I remain underwhelmed. The story emerges from some of the weakest of Spider-Man material (the whole Spider-Man: The Other, Ezekiel, Morlun stuff), and there is no attempt to contextualize and introduce the character and her supporting cast. Is she working at some kind of internet/TV news organization run by J. Jonah Jameson? Probably all this stuff was introduced in the pages of volume 3 of the Amazing Spider-Man, but that’s not good enough for an issue #1. I am interested in the sub-plot involving her missing family, but don’t think it’s enough to make me keep up with this. . . unfortunately.

Eh. This issue was kind of a disappointment in comparison to the build up in the previous issue. Instead of jumping off from the cliffhanger of Galactus’ arrival, it seems to take a step back and unnecessarily decompress the story – what seemed like maybe a two-issue arc has now become at least three. It is a shame, because every other issue of Slott and Allred’s Silver Surfer has been nigh near perfect. Of course, Mike Allred’s art is still fucking amazing, but that comes as no surprise. He is probably my favorite comic artist working in the superhero genre right now. 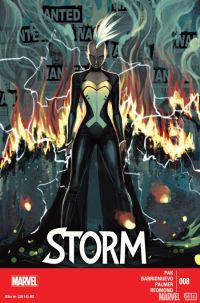 The end of the 3-issue arc that shows the real promise of this title. I have to say, I am not as impressed with the superhero stuff in this series, but this arc did develop Storm as an important figure to people of color in the United States (in a way the first issue did for her abroad), and I appreciate that. I guess I have an easier time accepting that than I do her super hyped up powers that don’t jive with how I remember Storm from the 80s. I mean, she was always powerful, but these days she’s what the kids call an “Omega-Level” mutant, so basically she can like destroy the world if she really wanted to (and almost did in issue #4 when she learned of Wolverine’s death). Anyway, the rumor is this title is on the verge of cancellation because it is not selling well enough. I wish they’d give Greg Pak time to really develop the series (esp. now that the art is finally looking pretty damn good), but we’ll see.

I miss Russel Dauterman’s art. I mean, the fill-in artist does a decent job, but there is no comparing to Dauterman working with Matthew Wilson on colors. The story is compelling as well. Jason Aaron is doing a great job making the mystery of who the new Thor is a continued point of interest, and his putting the anti-feminist anti-new Thor argument into the mouth of the Absorbing Man was a nice touch. Personally, I did not buy Titania’s “woman power” moment given her history of conflict with She-Hulk, but still I enjoyed it. This comic remains great. 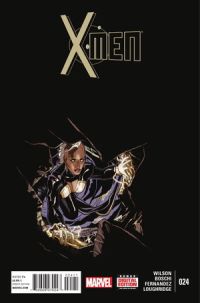 Okay, this issue won me over. The art is great and in combination with G. Willow Wilson’s sharp dialogue and her acumen as using the plot elements as a way to explore characters the story-telling is engrossing and fast-paced. I love how Wilson is using each issue of her limited run to focus on a different character’s POV, and the pleasure of reading this issue has me looking forward to issue #25, which is focusing on Monet, which is a character I had never heard of before issue #23, though the little bit I have read of her in the interim led me to believe that she is black or bi-racial, but she doesn’t seem depicted as such in these comics.