“There is only SECRET WARS” or at least it feels that way when you look at the number of tie-in books.

All Marvel comics this time around, and a handful of them end with a caption suggesting this might be the last issue as the new Secret Wars series heats up. I haven’t been following the events too closely, so I am not sure what is really going to happen, but there is a serious chance I will be dropping even books I love if I have to buy some tie-in event books to follow what is going on, or if the status quo is so (temporarily) shooken up that what is so great about some of these series gets tossed out the window. We’ll see. 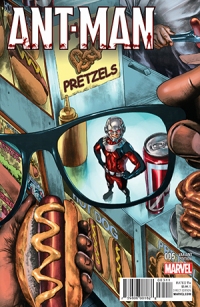 This issue takes kind of a serious turn, which makes the usual self-depreciating patter of Spencer’s Scott Lang inner monologue harder to tolerate. Most of the action is just one long fight, but we do get to see what happens when you hire b-list supervillains to work for your security company. 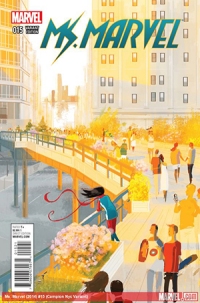 The last issue in a three-issue arc has Kamala dealing with some kind of Inhuman political coup that involves her would-be sweetheart and fellow Pakistani-Muslim Inhuman, Kamran. The romance is over and Ms. Marvel effectively fights off not only the bad guy’s goons, but her own feelings of shame and guilt in order to escape. It is not clear what is going on with the Inhumans from this issue. I guess this is part of some greater plotline, but it is besides the point in terms of enjoying this story. 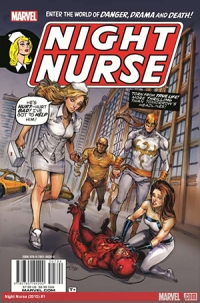 This is a soft-cover giant-sized comic (sans ads) approach to a collected edition of Night Nurse #1 to 4 and Daredevil vol. 2, #80. Night Nurse was a very short-lived series from Marvel’s early 70s attempt to draw more women to comics, but having women-focused titles, some of which were written or drawn by women.  The Night Nurse series was a soapy drama focused on three young nurses, Linda Carter the blonde daughter of a doctor (because a girl can’t be a doctor, but she wants to follow in her father’s footsteps), Christine Palmer, the red-headed debutante girl disowned by her father for her rebellious and shameful desire to be a lowly nurse, and Georgia Jenkins, the black one. Poor Georgia, while the two white girls’ troubles have to do with romance, she has to carry her entire community and her brother (who recently got out of jail and looks to be returning soon) on her back. Heck, Georgia never gets to be the focus of any of the main stories, while Linda and Christine do. The comics themselves are cheesy and dated and even though written by a woman, seem to have a low estimation of their capabilities and self-worth. The art, by Winslow Mortimer, is great though.  The Daredevil is from the Bendis era, and this whole endeavor is clearly an attempt to cash in the new Daredevil Netflix show, while Rosario Dawson’s character is not Night Nurse herself, she fills in for her narratively speaking. This issue is the first time the character (Linda Carter) was brought back since that 70s series.  Except the contemporary version doesn’t look anything like any of the three nurses of the original series and the story kind of sucks because 1) Night Nurse doesn’t actually get to do anything, the Hand shows up and uses ninja-mojo to save a dying Matt Murdoch, and 2) it is typical Bendis half-a-story pacing.

Spider-Woman vol. 5, #7 (released 5/6)
This series continues to be great. Sharp, fun, focused on “street level” costumed criminals and mining the contingencies that are often left unexplored in comics. The story here includes a kind of self-imposed reverse Stepford Wives scenario where b-list supervillain wives found a stable and secure community that seems to be paid for by tricking the men into thinking their families are in danger.  I am really interested in seeing how this plays out.

This issue reminded me of an Assistant Editor’s Month issue from back in January of 1984. It uses the conceit of prisoners of never seen supervillains trapped up in the head of the Statue of Liberty swapping weird stories about Squirrel Girl to present a kind of pastiche of Squirrel Girl vignettes in the style of Squirrel Girl as Bucky, Squirrel Girl as Spider-Man,  Squirrel Girl as some kind of Grant Morrison weirdness, etc.  . . In other words, it is just the kind of comic I love. Full of fun, unafraid to be earnest and silly.

Is this the last issue of Storm? The second part of a two-parter involving some former X-student turned homicidal villain that I had never heard of. I don’t think it mattered to the story that much. I guess there might be more pathos if I was familiar with his story (I wish editors were in more of a habit of giving us previous issue references like in the old days), but it was a basic “X-Mansion in peril” story. I am not used to a Storm who is written as being as powerful as this one is. I know this story involved her somehow psionically absorbing all the bad guy’s construct’s power and creating a magnetic cyclone to shoot them all into space, and then later called her friends into “dreamspace” (I guess that’s a thing). And I know that all of this was only possible because of the power made available to her somehow because the bad guy tried to take her over, but how could she turn his power against him to begin with? It’s a pointless question I guess. If the story were better those kinds of details wouldn’t bother me. The cover (by Stephanie Hans) is fantastic, by the way (click the cover to the left to see a bigger version).  I guess this is the last issue of Storm for me.

This is it. This is where we learn the answer to who is the mysterious lady Thor? Most of the issue is taken up by Thor and many female superheroes fighting Odin’s Destroyer. Dauterman’s art is gorgeous, but the choreography of the fight scene was lacking, relying too much on static action panels catching moments of a big fight, rather than giving us one or two set pieces where the action builds between panels, allowing for more interaction between characters both physically and socially, using the action to provide character moments.  I guess the problem is both Dauterman’s and Aaron’s, since he could have written a more inspirational romp ’em stomp ’em kind of fight. I guess that stuff is out of vogue in superhero comics, but I feel like if you are going to read comics where people punch each other a lot the artistry of the punching has to be good. It is the closest I come to understanding the appeal of professional wrestling. Anyway, at the end of the issue, the revelation of who is Thor was not a surprise to me, as it was my guess all along (I knew the cancer was a kind of narrative ruse). The whole situation does seem to suggest that as we all knew would be the case, a female Thor is a short term thing, regardless. But who knows, Secret Wars has started and maybe it will fuck everything up and allow for a female Thor alongside Thor.  I think there is even a tie-in called, appropriately enough, Thors.