Most of the issues reviewed below are from 4/15 to 4/29, but a couple go back a few weeks further.

This issue does its best to give readers the notorious women in prison shower scene without falling prey to base titillation or representing lesbianism for the male gaze. I think it does the job as well as one could possibly hope for and even managed to draw the male gaze into the narrative for punishment in the form of a peeping tom guard. This series is a treat, kick-ass action with thoughtful consideration of its themes. Kelly Sue DeConnick continues to rock it.

I wasn’t gonna pick up any Convergence or Secrets Wars/Battle World stuff, but I love tradition Captain Marvel/Shazam stories too much to pass this up. The art by Evan Shaner is fantastic, especially Jordie Bellaire’s colors, and while the story is nothing fancy, I did appreciate the nostalgic return of characters like Uncle Marvel and Talky Tawny. This is the first part of a two-parter where I guess what I think of as Earth X (in pre-Crisis days) converges with the Gaslight Batman from an Elseworld thing I’ve never read. We’ll see how issue two plays out. 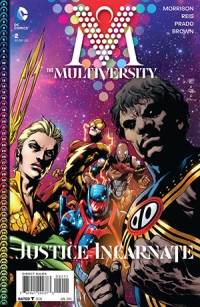 I am angry at this series. It is just a long meandering run of Grant Morrison not trying very hard, unless what he is trying to do is confirm my worst thoughts about him. This issue did have Barack-Superman and Captain Carrot, so I guess Morrison knows how to press the right fan buttons, but it is revolting what passes for clever. I am even angrier at my cat, Katie, because she chewed through the corner, thus foiling my plot to sell the whole thing as a complete set on eBay.

.Silver Surfer Vol. 5, #11 (released 4/29)
Slott and Allred do it again. A mind-binding issue that plays with panel layout and story structure in a wacky way that fits with the tone of a book that limns the edge of the tragic Surfer character to find the absurd humor of that kind of perpetually angst-ridden figure. So good. 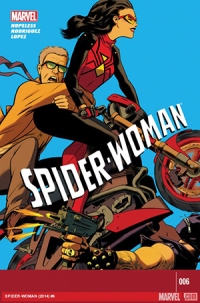 I read a positive review of this series over at Chasing Amazing. From what I understand the first four issues were Spider-Verse tie-in issues, but with issue #5, a new story arc begins, and we have Jessica Drew involved in street-level private detective like adventures with Ben Urich (who must be missing Daredevil like crazy). It is fun and light and has just the right level of self-awareness—she admits “shame googling” the search term “Spider-Woman’s butt,” and for a moment the Marvel Universe shared a single point with thousands of sweaty nerds who acted like Bendis wrote Luke Cage and Tony Stake back in New Avengers #4, as they stared too long at the cover. Anyway, pick up the series. Support it.

The Unbeatable Squirrel Girl #4 (released 4/22)
You gotta love this girl’s spunk. In this issue she takes on Galactus and wins! Sure, it is not the Galactus you are used to, it is not Kirby’s Galactus, or Byrne’s Galactus, more like a Galactus as voiced by Squirrel Girl herself, which is fine. If the conceit that this is all from Doreen Green’s perspective is needed to explain the off-kilter—but nevertheless fitting and fun in tone and theme—characterizations of well-known characters I buy-in. I think I’d like to see more time spent with her college friends and possible romantic interest.

Star Wars Vol. 2, #4 (released 4/22)
I haven’t been this into Star Wars since right before The Phantom Menace came out! I love these stories that take place between Episode IV and The Empires Strikes Back. I think of them as an alternate history. Cassaday’s art is great, and while he isn’t sticking around I hear he’s being replaced by a good artist. Let’s hope so.

Ever since I read this piece by Nyala Ali (over at Women Write About Comics), I have been rethinking my love of this series. The action remains great and I love the “mystery of the woman Thor” thing and the way the series highlights (to some degree) the misogyny embedded in the Asgardian perspective, though as the piece suggests, I think it ignores the more pernicious forms in order to point out the more obvious manifestations, and thus doesn’t really challenge the reader in a productive way. Anyway, I like the ending in which a Rainbow Bridge’s worth of Marvel’s women arrives to come to the new Thor’s aid, but hate that it was Odinson (former Thor) who brings them there. Freya would have been enough.

You now what my favorite moment of the entirely of Peter Jackson’s Lord of the Rings trilogy of movies? When in Fellowship of the Ring, after escaping Moria, the fellowship throws themselves on the ground and cry for their lost friend Gandalf. It doesn’t matter how many times I see it, or the fact that I know Gandalf comes back, it feels real to me especially because death is just another beat in most action movies. Here, if only for a moment, we are allowed to feel genuine grief. X-Men #23 has a similar moment. I will admit, I am a little lost on the finer details of the plot with some kind of Krokoa in the desert. All I know is that a team of close-knit people fight some weird monsters trapped underground, nearly die, and when they are reunited on the surface take a moment to be human—to show love and appreciation for each other. It is that kind of quiet moment that makes an X-Men book work, or at least should. I could even forgive that Gambit makes an appearance. This was the last issue of this series, but G. Willow Wilson is going to be co-writing the really poorly named A-Force, so I look forward to that.