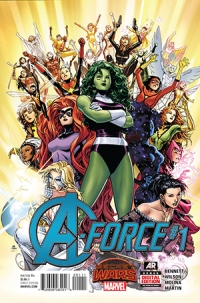 This is just not a very good comic.
The art is decent, even good in places—though perhaps a little disjointed in others—and there are elements of it that are endearing (especially the depiction of positive relationships between women), but even aware of the crossover context and of some of the tropes G. Willow Wilson and her co-writer, Marguerite Bennett are playing with (a nod to Wonder Woman’s Paradise Island) there is not a lot to like here in terms of a well-structured and characterized comic, regardless of the strangeness of the setting. I appreciate that A-Force is trying to use the open possibilities of the superhero comic book crossover event to carve out a feminist space, however temporarily¬—to demonstrate in action a community of women superhero characters that already exist in the Marvel Universe and that have really had a chance to be central to a story in a way that superhero comics have repeatedly failed at accomplishing. But the artificiality of the setting reinforces the impossibility of what it dares to imagine. Women can be in charge when it doesn’t count, when the world has been blown up and needs to be put back together. Just like the MU’s metaphor for ambiguous oppressed difference, mutant-kind, can only ever be in charge when  Scarlett Witch goes crazy, because we already live in the best possible world, Candide-style. I know it may be too early to tell and I am not even sure how long this series is supposed to last, but after one issue I know this is not for me. You should, however, read Jill Lepore’s piece on the comic (in the New Yorker of all places—did she get a review copy? How’d she get it over a week early?) and G.Willow Wilson’s response, but also this review, which goes into a lot more detail and is more optimistic about it than I am.  Worst of all, I think, is that this is the kind of book a lot of newish (women) readers will pick up, but find the lack of context off-putting. We’ll see. I hope I’m wrong and this turns into the kind of book I frantically chase down the back issues for, or wait for the trades.

(another Battleworld related issue) This has the feel of something that was an alternate version of House of M or something.  A world where Peter Parker and Mary Jane are still together and have a young daughter named Annie (shouldn’t she be May?). A Spider-Man that resembles something closer to the Spider-Man I grew up with – the loner, the misfit, not an Avenger, but not above seeking them out for help. You remember that guy, right? In that sense I like this comic, but in terms of the cliche “I have to kill a man (Eddie Brock aka Venom) to keep my family safe”  I can do without the grimdark superhero stuff. The issue ends with Peter having given up being Spider-Man (and all the other superheroes being dead) and teaching his daughter the important lesson of looking out for self and family above all things while in the background Vulture robs a lady of her purse.  Sad.  I doubt I will continue with this limited series. I don’t want to see a “What If?” Peter Parker who’s abandoned his principles, that’s what mainstream Spider-Man has been written like for way too long.

I am a liar and a hypocrite about not picking up any Secret Wars-related books (maybe I never made that claim. I still haven’t gotten any of the actual main event books). Anyway, these Battleworld stories only work if we don’t think about them too much. Sure, something like K’un Lun coheres because of the orientalist tradition of an ahistorical unchanging mystical Asia, but when the story is embedded in something akin to modern military context a lot of questions start coming up – though I guess it is no less a fantasy.  That aside, Kelly DeConnick knows how to write the hell out of this book given the limits of the company-mandated shape of the story. You can tell she enjoys writing women who are competent, diverse, and ass-kickers, but also flawed and that joy comes through in this book. David Lopez’s pencils are mostly great, but sometimes his faces get weird, like they were hurried. Still, I am looking forward to seeing how this story plays out.

Convergence: Shazam! #2 (released 5/27)
This comic is nothing special. There isn’t even much of a story here, and a waste of the juxtaposition of the noir-ish world of Gotham by Gaslight with the bright colors of the world of Captain Marvel and the Marvel Family. But, if this is what was needed to return to a Captain Marvel that is actually called Captain Marvel (not Shazam) and a post-convergence DC universe that has room for the ebullient stories of that a character I love, then I was happy to buy it.

Obnoxious and aggressively unfunny horseshit.
Why did I pick this up? I am stupid. I have never bought a comic featuring Deadpool, and the last one I can remember reading with him in it, I am pretty sure he was still called The Deadpool, but I was drawn in by the reproduction of 1984 Mike Zeck art and a re-telling of my nostalgic favorite Secret Wars, but with a humorous acerbic approach.  This is just nonsense. Literally for 12-year olds whose parents take no interest in what they read, which means I only have myself to blame.

Master of Kung-Fu #1 and #2 (released 5/20 and 6/3)
I had skimmed a couple of positive reviews of this comic, so I flipped through it at the comic store and the art appealed to me. I grabbed issue #2 as well on a whim. I wasn’t going to pick up any of this Secret Wars/Battleworld nonsense, but this comic (which might be a mini-series? might be another example of Marvel doing that shitty thing where they start new series as tie-ins to “crossover events”) doesn’t seem too tightly tied to whatever the hell is going on in the Marvel Universe right now. It uses the recognizable logic of fantasy Asia as depicted in your favorite chop-socky films, except here the fictional mystical martial art nation of K’un Lun is populated by an ethnically diverse cast, including Callisto of the X-Men/Morlocks and Rahne of the New Mutants, along with a version of the Hand from Daredevil (called The Red Hand) and of course, Iron Fist. I know that this is all somehow existing in a universe ruled by God-Emperor Dr. Doom, but that doesn’t seem to matter to this story. My big complaint is that Shang Chi himself is drawn in a way that seems to have softened his Asian features. Maybe that’s the artist’s way to avoiding stereotypes, but in a lot of panels it looks more like erasure than diversity. Still, first issue is great and the second issue has that classic revenge/I will be your Kung Fu master set-up.  Fun. 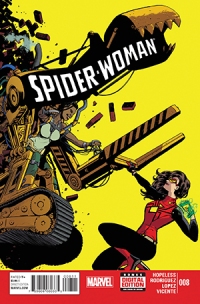 The end of the first arc (well, the second, but the first one doesn’t count because it was an Axis or Spider-Verse tie-in or something). This is my new favorite Marvel comic. I’ll be writing about this whole first arc soon, but in the meantime, be sure to pick up this book to make sure it sticks around. If you claim to be about positive representation of women in superhero comics and damn good stories, you should be  getting Spider-Woman.

Star Wars vol. 2, #5 & #6 (released 5/20 and 6/3)
This series continues to hit on all cylinders. It has the right energy for a serialized version of these characters in new stories that do their best to fit the existing canon without being so beholden as to be afraid to give us what we want: action. It makes perfect sense that this series would work so well. First of all the Star Wars franchise is more popular now than ever, I think. Secondly, the source material for Star Wars are old adventure serials, so a return to serialization is only natural. If you like Star Wars or high adventure space opera check it out. My only complaint about this series is that Jason Aaron relies a little too much on dialogue and phraseology from the movies in a way that is too repetitive and awkward (for example, Han calling Leia “Your worshipfulness”).