I gave up watching Kevin Smith’s Comic Book Men (on AMC) after one episode. I was turned off by its reinforcement of the kind of mouth-breathing exaggerated testosterone as a signifier of social awkwardness image that it presented. Shit, the very first discussion on the show (if I remember correctly), was who they thought was the hottest female comic character. Sigh.

Thus, when I found out that NAT GEO was putting on pilot for a similar show centered around Midtown Comics, called Comic Store Heroes, I was as excited to see its first episode (as an alternative) and as I was trepidatious (knowing how bad it could be). While I can report that it is marginally better than Comic Book Men, that really isn’t saying much.

Perhaps I expect too much in wanting a straight up documentary-style series about the workings in and around a comic book shop and its related community of customers and comic fans, but I find the artificial drama built up around its narrative elements to be equal parts cheese and underdevelopment. 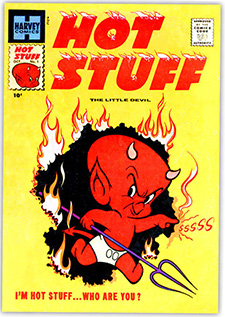 For example, a good amount of time is spent on Alex, the store’s buyer, and his attempt to find the owner a copy of Hot Stuff #1. Unfortunately, there is no attempt to inform the viewer about why this is such a difficult task. Sure, they mention that it is from 1957 and that it was a children’s comic (thus implying that few of the original readers bothered to keep a copy around—though that is never explicitly explained), but how about putting Hot Stuff and Harvey Comics (its publisher) into little context? It is suggested that the buyer follows up with all his contacts to find a copy, but there is no sense of how many people that is, how many phone calls? How many false leads? If you want to show us how difficult it is, give a sense of how much time it takes. Sure, they do show him check out an auction house (a trip that seemed more about getting them out of the store than the actual possibility of finding it there) and one other major collector who did not have it, but these events appear isolated. When Alex does finally find the issue, it is anti-climactic, as is the haggling that follows. It seems really obvious that the show producers knew he was going to find one where and when he did.

The false drama around whether or not Frank Miller is actually going to show up at their Comic Con booth was also lame. Though I will admit that the fact that Frank Miller is an islamophobic right-wing douche makes me not very interested in anything involving him.

Another disappointment is with the show’s representation of women employees and fans. There is a whole segment on Zoë, a cute woman in a low-cut top that works there. Thor, the store’s marketing guy, tells us how Zoë is approachable and as knowledgeable (if not more so) than any man, but she is described as the store’s “secret weapon” and they just show her talking to sailors and getting flowers from a secret admirer (which turns out to be a prank from a co-worker anyway). Why not show her actually demonstrating some of that knowledge they attribute to her? Ultimately, she is just eye candy, or at least that is how she is presented by the show. Sad, but predictable.

The area that I think the show does move in a commendable direction was in its segment on Jill Pantozzi (a writer and editor at The Mary Sue). It is rare that TV shows present disabled people as human beings and not just objects of pity or the butt of a joke. However, much like Zoë, while we learn she is a blogger and how her identification with DC’s Oracle is important to her, we don’t really get to know about her comic knowledge and her perspective on the medium.

The worst part of the show was the segment on the comic creator living on food stamps in order to follow his dream and get his title on the shelves at Midtown Comics. I mostly just felt bad for the guy.  It could be that the slick look of his book with its cliched hero could be disguising some fantastic new take on the genre, but the show certainly didn’t do anything to make me believe that.  If comic book superheroes teach us that we should never give up and never stop trying, then that is one lesson I think more people need to learn to ignore, and to be realistic about what they can accomplish.

Anyway, unlike the Kevin Smith show, I would give Comic Store Heroes another shot or two. Let’s hope if they continue with it that instead of the staged and stilted attempts to create humor around folks coming in to sell comics and memorabilia that the former seems to be mostly built around, that this show will be more than just a marketing vehicle for the store, and actually delve a little deeper into the community they serve and the relation between a subculture and a commercial venture. Hopefully, they will explore how the softening of the comics market means that Alex (the buyer) cannot offer more for these extensive collections he seeks out, or what makes a particular issue like Hot Stuff #1 or The Incredible Hulk #181 so valuable, not only monetarily, but to the comic readers who identify so deeply with their contents.

It was a pilot episode, there is still plenty of room and time for improvement.

EDIT: The full episode is now available on You Tube (at least til it gets taken down): Click here.